When deciding to build a panoramic veranda, go to your homesite, stand where the centre of the veranda is supposed, and look around. Pay attention to everything that you see, and to everyone who sees you at this moment. When the time and money allocated for the construction is spent, everything will remain the same. Visually, the difference will only be that between you and the environment there will be panoramic glazing.

When there is an endless blue sea in front of you, behind snow-capped mountain peaks, or there is an alpine meadow or pine forest around, you will get a result that will surpass all expectations.

Such a veranda will be filled with sunlight, and you will not feel its borders and outlines. Due to the reflective ability, the inner space will connect with the surrounding landscape. At first sight, it is not immediately possible to see where the structure begins and where it ends. The landscape behind the glazing of the veranda will be vibrant and constantly changing, and the very concept of “first sight” here will take on a literal sense.

Significant advantages of this modern veranda with panoramic glazing, built using the half-timbering technology, are the large-sized HS-Portal® terrace sliding doors and large-format panoramic glazing. Everything else is secondary since it can be no less successfully implemented using other construction technologies.

We put HS-Portal® sliding terrace doors in the list of advantages in the first place. Without them, the glazing of the veranda ceases to be large-format in the most visible and often used place - where there will be access to the terrace.

HS-Portal® wooden terrace sliding doors of AF and EF schemes can be used in half-timbered houses in any combination with each other when installed both on straight walls and on corners of a building.

The owner of this veranda sought to realize the idea of an open interior with a high level of daylight, unobstructed view and movement. Life here takes place not only on fifty-five square meters inside but also on thirty-five square meters of the open space of the terrace outside.

The design features a unique dynamic facade. The HS-Portal® sliding terrace doors of EF and AF schemes open up more than seventy-five per cent of the front. They are integrated into the frame of the building using open-angle technology, visually merging with the contour of the veranda and seem almost frameless when framed. This technique allows the owners to remove almost half the perimeter of the walls within a few seconds and end up in a pine forest.

Taking into account the climate of Yekaterinburg and the size of glass units, the requirements for thermal and strength performance were the main design factors. The whole structure uses double-glazed windows from two 8-mm safety-proof tempered glasses, one of which is multifunctional. The use of large-format glass allows you to minimize the number of columns, transom-bars and nodes.

The interior decoration of the veranda is made in natural colours and natural materials.

The space between the ceiling and the roof is filled with vermiculite and form a closed climatic “isolated attic”, which functions as a heat buffer for harsh Ural winters. The attic structure also hides part of the electrical wiring, pipes and other equipment.

Sources of heat in the room are underfloor heating and a wood-burning stove.

The veranda looks completely different at night as it is filled with soft light from a small stove. A small and efficient wood burning stove is heating the room. Its flame is fascinating and creates a sense of peace and unity with the surrounding forest. 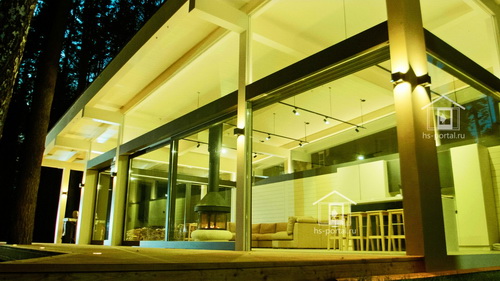 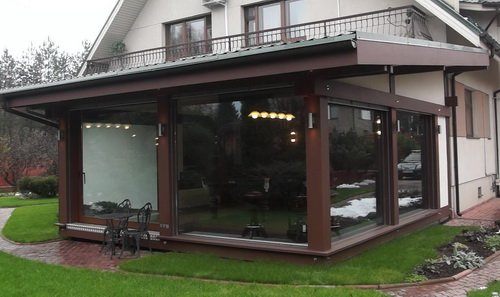 Veranda, attached to a house 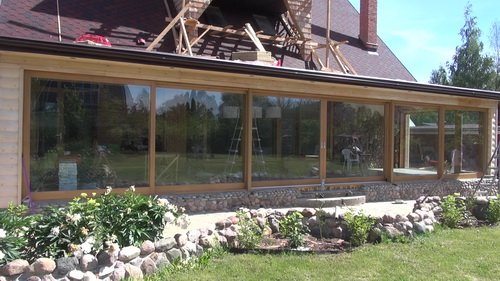 Glazing of an existing veranda